INSTALLATIONS
FURNITURE
exhibitions/publications
Welcome,
nice to meet you!
Social developments influence the way we experience and describe space (Proctor, 2015). In architecture, we comprehend the following spaces: space of place, space of flow and non-place. The role of time and place are elements that define the type of space.

Traditionally, we understand space as shaped by our physical and near surroundings: the space of place. The space of place is the unity between time and place (Heynen, 2001). In spaces of flow, time is shared but place is not. In space of flow, people are able to connect to each other while being in distant places, online and offline (Castells, 1997). The space of flow is initiated by globalization. The developments of technology, mobility and climate change create an interconnected world (Castells, 1997).

In architecture, space of place is defined by static elements and designed to host a certain function, like living or working. The space is determined by its geographical location. (Augé, 1995). In spaces of flow, architecture is still static and immobile, but functions are partly determined by their geographical physical place and partly not. The space of flow is a combination of places and non-places as described by the anthropologist Marc Augé (1995). Augé defines non-places as places distorted from place, without identity, not geographically bound and temporary (Augé, 1995). He likes to refer to airports when describing non-places, where you won’t meet people because of its temporality and lack of identity.

Our current state of social and ecological developments triggers us to rethink how we perceive space and practice architecture and urbanism. I see an opportunity in creating a new type of city that is favorable for tackling the issues we are facing now and in the future: the city as space of non-place.

TRANSITION AND FEELING
Coloured light reflections give the elements different identities. The direction of the light in relation to the location of the element determine the atmosphere and feeling of the space. The reflections create a subtle transition between inside and outside.

FLOW
The spatial elements are, next to the people, moving agents. Architectural elements arrive in front of you and you can move to the elements. It’s is up to the inhabitant where and when it wants to enter another building that hosts another function. All the buildings have a 45-degree wall. Two walls with this angle fit perfectly together. The glass sliding doors can be opened when two buildings link. More voluminous buildings act as a landing field. The top of these buildings function as public outdoor spaces to enjoy the fresh air and the view. 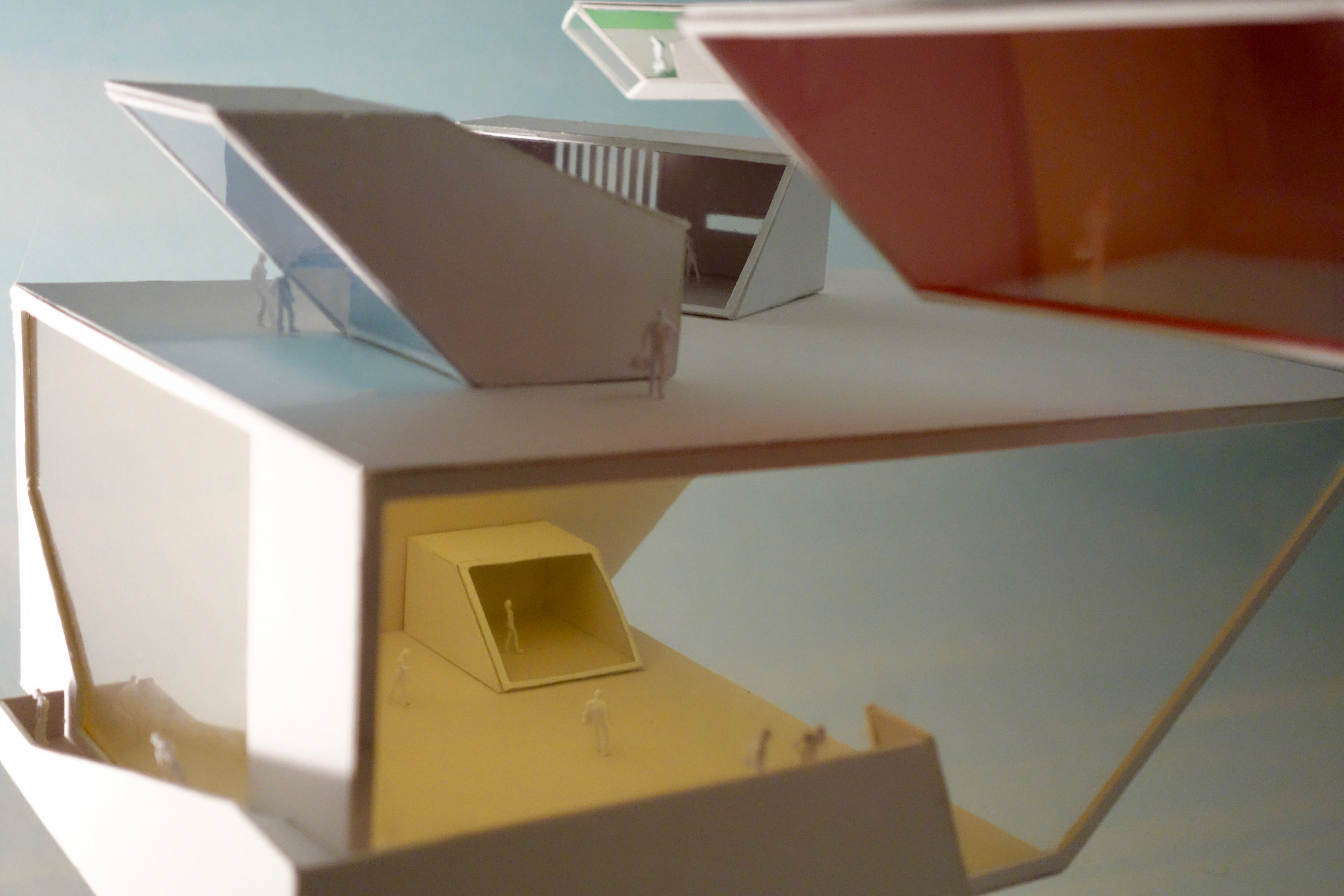 FUNCTIONS
The spatial elements host various functions that you find in a house, like a kitchen. The spatial elements are accessible to all inhabitants. This way creates a dynamic of living in which streams of people meet and share space. To satisfy the human needs, the elements are divided into every kind of space from private to public.
current situation: static and heavy feeling
future city: dynamic and flexible 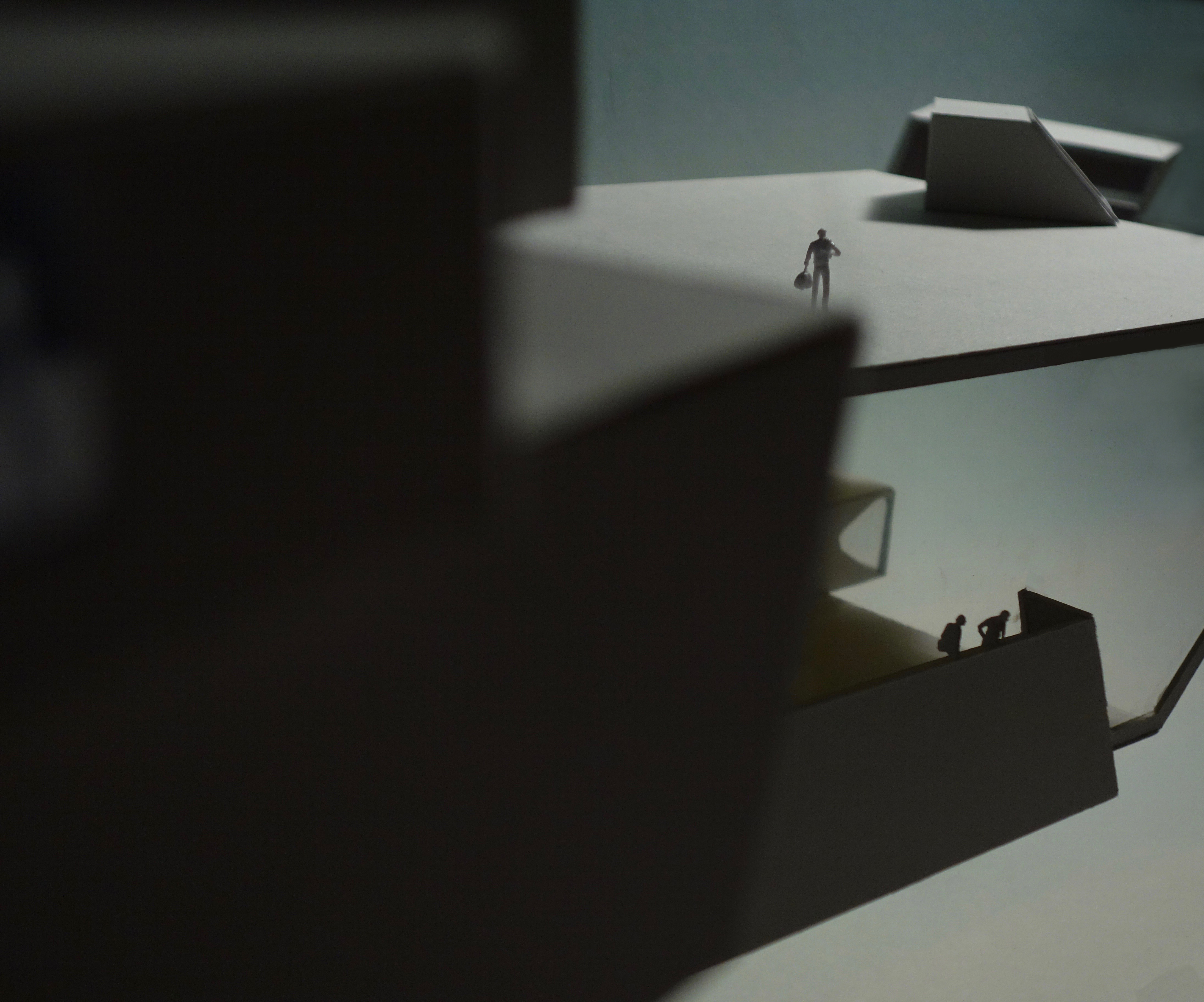 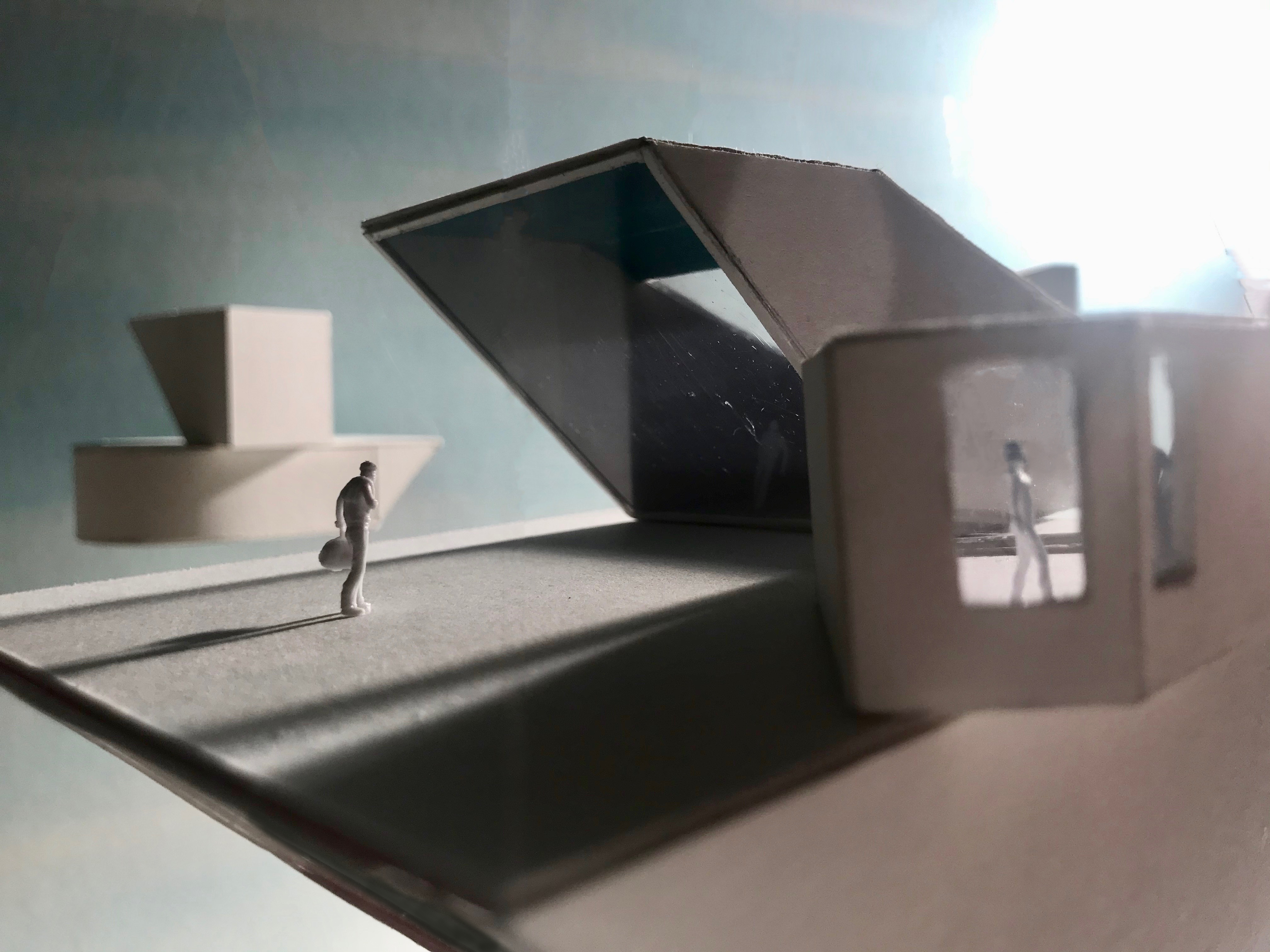 The term non-place how I like to use it, is in line with Augé his reasoning, but partly not. Instead of describing non-places as places where people are the moving agent, non-places can also be described in which the moving agent is the space itself. A dynamic and diverse condition is created when places are not determined to geographical locations. Instead of seeing temporality as a negative element of non-places, as Augé thought, I see it as an opportunity. Buildings are then moving agents and shaping your surroundings according to social developments and wishes.

I think that embracing the temporality of places by embodying space into mobile architecture, will actually create a dynamic spatial identity that stimulates physical interaction between people. Migration flows stimulate diversity (de Cauter, 2001) and mobile places facilitates the flow of people and therefore diversity. Diversity combats loneliness (GGD Rotterdam-Rijnmond, 2016). Cities as a space of non-places will host the nomads of the future. Thanks to the ever-changing dynamics of the mobile architecture, places will not fall into urban processes like gentrification. Gentrification is highly connected to the static geographical location of certain areas. Furthermore, mobile cities give the opportunity to conserve nature and not destroy it to make space for infrastructure. Mobile cities are no big targets of environmental consequences due to climate change, like floods.

The city as space of non-place can be achieved by introducing mobile architecture, that moves in all three dimensions. This means that the space of flow can be materialised into physical streams and connections by inhabiting the mobile architecture. The position of place and time can then be aligned. Space, as well as functions and social interaction are not determined to geographical locations, but will always happen in a physical manner instead of an online manner. Mobile architecture creates non-places that are not generic but will have various identities, always changing. The identity of the space is determined by the composition of the separate mobile architectural elements.